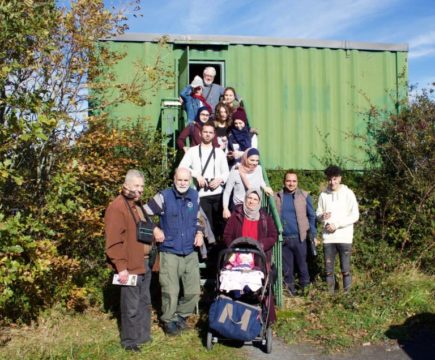 The fifth Sanctuary in Nature excursion took place on Sat Oct 20, and was rated a big success by all who took part.

This excursion was a first in several ways:

This brings the total number of adults who have participated in our outings to 23. And at least 8 others have expressed a strong interest in joining us, but simply could not come this time.

We had two new volunteers with cars, Nicola Winter and Kate Kavanagh. (Thanks for the pic with this post Kate!)
The general consensus was that it was a happy and successful outing, and that it bodes well for 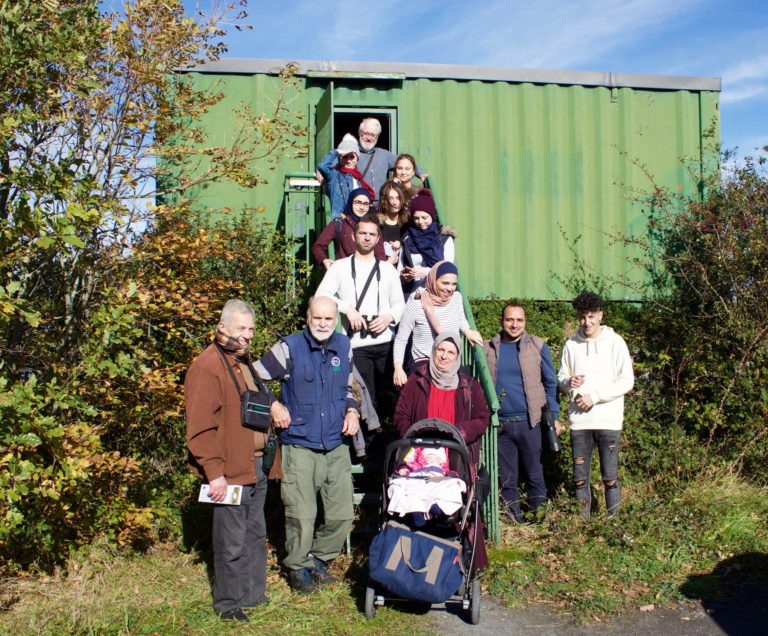 expanding the project in future.

Many thanks to Tian, Nicola, Kate, Susan Wogan and Clare McEneany of Sonairte, Frank Prendergast and all the Birdwatch volunteers, and especially Muhammad Achour, for invaluable support on this event.

Planning the trip was tricky, as we had to hire a bus – expertly organised by Nicola — and for a time it looked as if we could not justify that in terms of uptake. We had bad luck with a number of our regulars – though sometimes good luck for them. Naser (Syria) now has a job on Saturdays. Boggi (Mongolia) had a baby just a week before our trip! Angel was called to an important meeting at the last minute. Donika (Albania) was also not able to attend.
However, Muhammad Achour worked very hard and had great success in mobilising the Syrian community. He brought his niece Raghad, and Ahmad Fdawi brought his parentsMohamad Ghazi and Ruba, and his three sisters, Razan, Rama, and Ghada, who brought her 13 month old baby Lana. Four other young Syrians, led by Aya – if they like they are welcome to post their names here, I didn’t get to note them — joined us from Mosney. Another five Syrians had to drop out due to a visit, and three young Somali women were also originally booked through Muhammad’s outreach.

The very helpful bus driver, Joe of Kierans Bus Co from Drogheda, picked us up from Mosney and we arrived in Turvey/Rogerstown at 11.15. We had brought snacks and drinks for everyone for the walk, also financed out of the grant.

Cormac Crowley and Jim English of Fingal BW greeted us, and Jim gave us a guided tour walking to the hide. The day was very sunny. We picked blackberries and rose-hips, and discussed the hawthorn as a fairy tree. We saw mallard, a swan, gadwall, a jay and buzzards on or near a little lake en route. Our guests took great interest in the birds, using binoculars lent by Sonairte, Cormac and myself, and Jim’s telescope.

At the bird hide, we were greeted by Liam Kane, who had provided photos for publicising the excursion. He pointed out a variety of birds, egrets, golden-eye, lapwing and curlew especially. Again, our guests showed a great deal of interest. We commented on how very few geese and duck were there, compared to the hundreds or thousands usually at this time of year. Climate change…they are waiting further north, migrating more slowly. We walked back up, with Cormac helping us with lifts. The mood was very good. All the BWI volunteers commented on how appreciative and interested our guests had been. We left about 1.30 pm.

We drove to Sonairte, where a big table was waiting for us outdoors, and a band playing, with a number of local people also enjoying the Sonairte Úlla festival, in celebration of the apple harvest. Some of our guests needed a room for prayer, which Susan Wogan of Sonairte, who has been most helpful throughout, quickly organised. Then we had a lunch of potato soup and bread, followed by tea/coffee, and Sonairte’s signature apple juice, freshly pressed. 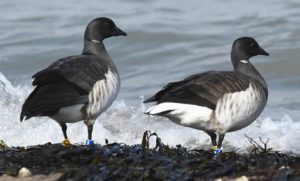 We then walked through the orchard, and were amazed by the variety of apple types, from tiny yellow and red ones to great dark golden ones. We did part of the nature walk along the river, and saw more ducks, and wading birds.

We came back through the vegetable gardens and polytunnels. Ahmad’s father, Mohamad, wondered repeatedly why we Irish do not grow more vegetables in polytunnels. He also told us stories of Syrian landscapes where the roads are lined with apple trees in fruit at this time of year.

Our final stop was the Sonairte Apple Pie competition, where Muhammad’s niece, Raghad, entered her delicious apple cake with walnuts. Nicola also entered a tasty apple pie. Unfortunately the judges ruled that there was not enough apple in either dish to qualify as winners, but they praised them both highly. Two of the winners were also ‘new Irish’, Polish women living locally.

I think this excursion shows beyond doubt that there is enough critical mass to continue expanding the Sanctuary in Nature project, and perhaps extend it to other areas. A comment from Liam Kane of BirdWatch Fingal sums it up well:
“What a wonderful day it was yesterday. Not only the brilliant sunshine and calm weather. But the sight of 5 goldeneye, a Ruff also a common Sandpiper that usually migrates to Africa for the winter accommodate our own visitors on the day with its presence, Also our visitors made the most of their short time in the Hide, when they viewed all the other birds in the Estuary, It was just wonderful to meet those people from Syria and other countries not only to give them the opportunity to experience the bird life in Rogerstown but also to meet other birdwatchers in the Hide at this time of year and exchange ideas and the different type of birds that visit the estuary during the winter.”

Our visiting group were very enthusiastic but also very courteous, well mannered and also enjoyed the Cupla Focal that we all had in the different languages that we expressed. What a great day and roll on our next group of visitors that visit Rogerstown Estuary to view the birdlife.

City of Sanctuary Dublin is not affiliated to any political or religious organisation, but is linked to the wider City of Sanctuary movement which was first established in the UK in 2005 with a vision for making cities places that had a culture of welcome and inclusion, especially for those seeking sanctuary.